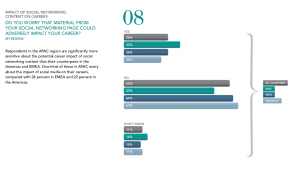 Job seekers in the APAC region are most concerned about social media's potential career impact, click to enlarge

More than a quarter of job seekers worry their social networking activities could hurt their career prospects, according to a recent survey from the Kelly Global Workforce Index.

26% of 96,000 respondents across North America, Europe and the Middle East (EMEA) and Asia Pacific (APAC) voiced concerns about the potential career impact of their social media profiles. There was some variation across regions, however: 33% for APAC respondents compared to only 22% in the Americas.

Interestingly, Kelly found that though the level of concern varies by region, self-censorship does not. An average 33% of job seekers said they deliberately edit or censor content on their social networking profiles. This was the same across all regions except for EMEA, which was slightly more proactive at 34%.

High-profile scandals involving public figures and their social media accounts have raised awareness of the impact of internet activity on professional credibility. As online media evolve and more and more workers begin using social media as an integral part of their work day, these concerns will only grown.